Our customer 3stepIT has a multi-year environmental sustainability project, called Walk the Talk.  In 2019 they asked us to come up with a new campaign concept to launch it for the public. We designed a social media video campaign for the Group's Nordic offices.

The video representing Finland and the 3stepIT Group as a whole, the Group CEO Carmen Ene talks about the Walk the Talk programme and introduces the Finns’ eco initiative: In Sweden, the eco topic is electricity consumption. Watch the video to see how Pontus strives for energy efficiency by turning off the lights and equipment that are not needed:

Known as a responsible IT service provider 3stepIT wants to act responsibly and set an example for others to do the same. The Group's sustainability programme consists of several long-term development projects and smaller projects carried out on a country-by-country or site-by-site basis.

For the previous years, "Walk the Talk" had been an in-house programme in which staff could freely brainstorm new eco initiatives for the company. The project had caused enormous enthusiasm internally and now 3stepIT wanted to invite external stakeholders to participate. The idea was to show example of how small changes in everyday practices can have a significant impact on the environment and thus to inspire other companies to review their practices from an environmental perspective.

In 3stepIT's Danish office recycling was prioritised. Watch the video to see how used papers, bottles, and batteries find their appropriate places:

We designed a campaign with action-packed videos showcasing local eco-deeds from 3stepIT's Nordic offices. The campaign consisted of the over all concept, video content ideas, video scripts, video shoots, the recording of narrations as well as editing and translating the subtitles for the videos.
We then constructed a social media campaign around the videos using several social media platforms. The campaign was run during the Circular Cities Week, at the turn of October and November in 2019.
The week was kicked off by a teaser post, followed by a video filmed at the Helsinki office, which introduced the eco initiative of the Helsinki HQ and the Group's environmental responsibility agenda. These were followed by the videos shot in Sweden, Norway and Denmark, each posted on a different day.
The narratives for the videos were recorded in the local language, but all had English subtitles, as is best practice on social media. Text descriptions accompanying the videos on social media were prepared in Finnish and in English so that the 3stepIT’s marketing team members in each country could either use them directly, translate them into the local language or adapt them as they pleased.

The Norwegians are addressing environmentally sound commutes. See how Geir, Marte, Lars and Farshid travel between the office and their homes: The campaign message – encouraging viewers to follow the example or come up with their own eco initiatives – reached a wide audience through social media, including 3stepIT employees, customers and other stakeholders. The videos were much liked and delighted the staff working at each location, their close friends and 3stepIT customers and partners.

The videos evoked a positive vibe and employees were particularly impressed by the style and quality of the videos. 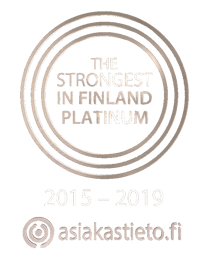